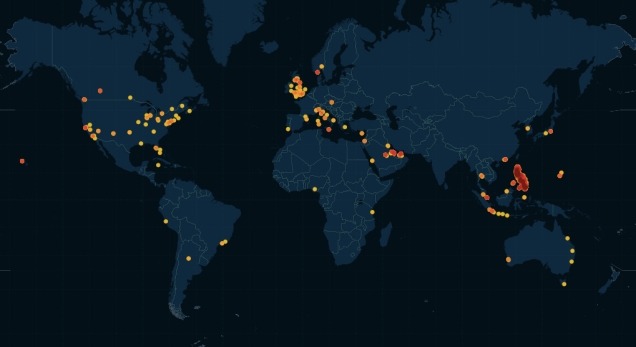 Saturday. This is an update of last night’s post. Here we discuss all the tweets collected from 12:30PM-11:59PM on 26 July 2014 (GMT +8) on the show The Voice Kids Philippines. Note that the tweets were streamed via the Twitter API, which is only 1% of the almost impossible to access Twitter firehose. The plot below shows the number of tweets for a given time-frame. The region enclosed by the red broken lines marks the duration of the show— on Saturdays, it starts at 6:45PM. 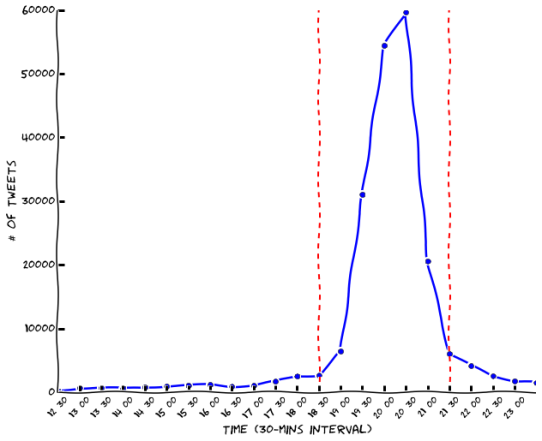 Zooming into that window, a 30-second dynamic cartodb visualization of the geotagged tweets (7PM-9PM) was constructed— they compose only 3% of all the tweets collected. The bursts in the clip are particularly interesting (see plot below the video). The peaks signal the period when the favorites were on stage performing. Again, the highest spike is around the time when Darren performed. 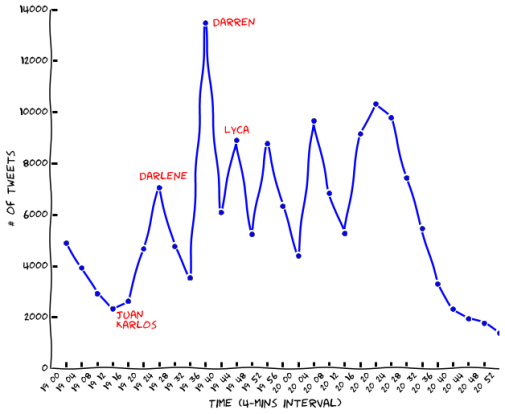 The figure below gives the number of hashtag mentions of the four finalists from 12:30PM to 11:59PM yesterday, 26 July 2014. What I have done was collect all hashtags that have the finalists’ name in them, did some processing, and clumped them all in their respective hashed name tags. To illustrate, for hashtags #godarren and #teamdarren, for example, they were “re-hashed” as #darren.

As mentioned in the previous post, the result can be a bit tricky since, for Darren, for example, this could include the buzz that has been going on around that if he wins, he will “donate the money to the church and the house to Lyca.” With this, the mentions cannot just be attributed solely to his performance. Later today, I will look at all tweets that include mentions of his name and correlate the count with the words “house” and “bahay” to verify this assumption. In addition, a tweet can have multiple hashtags with their names in it— I am counting all of them at the moment. Finally, it should be noted that in this inspection the “sentiments” of the tweets were not considered— whether they are positive or negative.

On the other hand, my friend Chris ran some stats on Google and obtained the following trend:

The same method, he mentioned, was able to capture the final four during the semi-finals, but not completely the ranks, that is:

In comparison, ABS-CBN released the following order based on the voting: Lyca, Darren, JK, Darlene, Tonton, Edray. While the ranks of Lyca and Darren were correctly predicted, JK’s was switched with Darlene’s, while Tonton’s was switched with Edray’s. The search phrases are the following “[Lyca/Darren/Juan Karlos/Darlene/Tonton/Edray] the voice Philippines”. For the semi-finals, the search was limited to July 19-20, while for the finals it should start on July 26.

I am not following the show. However, looking at these tweets, I would say that Darren is the most “popular” among the finalists as of last night, at least on Twitter. Will this translate into votes? Well, that we have yet to see. Nevertheless, he was definitely the darling in last night’s show. If the dynamics does not change tonight, i.e.  if there would be no drastic changes/accidents/whatnots, it looks like Darren will once again be getting most of the attention, at least on Twitter.

Finally, some important things to note:

What do you think? 🙂

One comment on “The Voice Kids Philippines Weekend (Saturday) Showdown”

This entry was posted on July 27, 2014 by E in Philippines and tagged Darlene, Darren, Juan Karlos, Lyca, The Voice Kids, TVK Philippines, Twitter.